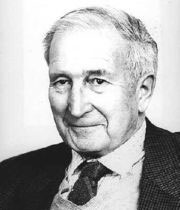 Antony Flew, the noted philosopher, died in April of this year.  Albert Mohler has a helpful post explaining why Christians can be encouraged by Flew’s rejection, at the age of 81, of atheism, but why we should also be warned by his rejection of Christianity.

Flew was the son of the Methodist minister, and until his mid-teens regarded himself as a conscientious, if unenthusiastic, Christian believer.  But reflection on the problem of evil (how can God be both all-loving and all-powerful?) led him into disbelief.  He studied philosophy at Oxford, and adopted the view that theological assertions cannot be true because they are not supported by adequate evidence.

In his teaching, writing, and debating over many years Flew espoused atheism.  However, in 2004 he announced that he had rejected atheism and come to a belief that some kind of God ‘probably’ existed.  He explained that he had come to this conclusion after 20 years of reflection on the evidence of nature, concluding that the laws of nature could only have come from a divine mind.

As Mohler points out, Christians can welcome Flew’s change of mind, but should be cautious about claiming him (or Einstein, for that matter) as too close an ally.

Flew stated that his god was “most emphatically not the eternally rewarding and eternally torturing God of either Christianity or Islam,” but rather a deistic god who functioned as the First Cause of the universe.  In other words, Flew’s god does not communicate, intervene, rule, or judge.  In answer to those critics who suggested that Flew’s was virtually a death-bed conversion resulting from a fear of death, he answered with a firm rejection of the after-life: ““I want to be dead when I am dead and that’s an end to it.  I don’t want an unending life. I don’t want anything without end.”

Flew’s ‘pilgrimage’ reminds us that some of the most vocal unbelievers may be nearer to belief than we (and they) think.  And some of today’s most prominent Christian spokespersons are ex-atheists.  But we need to realise too that rejection of atheism does not necessarily lead to acceptance of the Christian faith.  Believing that there (probably) is a God is not the same thing as coming to faith in the Lord Jesus Christ.