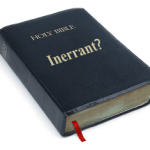 [Note: I’m using the word ‘heresy’ in the old-fashioned sense of ‘divisiveness’ as in Titus 3:10 (Authorised Version): ‘A man that is an heretick after the first and second admonition reject.’]

When Mike Licona published his book on the resurrection, he ventured to suggest that some elements in the Gospel story might be symbolic in character, rather than strictly historical.  The passage which has received most attention is the one in Matthew 27:52f, about the raising to life of many dead saints.  Licona ventured to suggest that Matthew may have intended this to be understood as apocalyptic symbolism, rather than as historical event.  This aroused the ire of arch-inerrantist Norman Geisler, who issues a series of ‘open letters’ to Licona, leading to the latter being fired from his teaching position at Southern Evangelical Seminary.

Now, I have to say that I find Licona’s argument concerning the non-historicity of this passage unconvincing.  But I find Geisler’s strategy even less convincing.

Here’s how the ‘logic’ works.

Geisler, Packer, and others framed the Chicago Statement on Biblical Inerrancy (CSBI).

Licona, and the institution he works for, are signed up to the CSBI.

Licona publishes a work in which, while strenuously defending the doctrine of our Lord’s bodily resurrection, suggests that some details of the biblical account may be symbolic or apocalyptic in nature, rather than strictly historical.

Geisler responds by saying that to interpret passages such as Mt 27:52f in that way violates the CSBI.

I have written elsewhere about some of the muddles that the doctrine of inerrancy tends to produce.  But here’s another one.

Geisler sets great store by who is on his side, and who is not.  He seems perfectly prepared to denounce fellow-evangelicals, themselves upholding the doctrine of inerrancy, but who have the temerity to think that Licona has been badly treated.

So what about that great evangelical stalwart, J.I. Packer?  Packer, it will be recalled, was one of the original framers of the CSBI.  Packer has gone on record as saying that although he thinks that Licona’s interpretation of Mt 27:52f is wrong, he does not regard this as an ‘inerrancy’ issue.

But Geisler insists that the disagreement between himself and Licona is an inerrancy issue.

But what about Geisler and Packer?  For Geisler, the interpretation of the early chapters of Genesis is also an inerrancy issue.  He insists that doctrine of inerrancy requires belief that Genesis 1 reports  ‘space-time events which actually happened as reported in the book of Genesis. . . . Likewise, the use of the term ‘creation’ [in ICBI] was meant to exclude the belief in macro-evolution, whether of the atheistic or theistic varieties.’

But for Packer, Genesis 1:1 – 2:4 is a ‘prose poem’; a ‘quasi-liturgical celebration of the fact of creation . . . and certainly not a kind of naïve observational account of what we would have seen if we could have traveled back in time and hovered above the chaos.’  Of the various alternatives, Packer adopts the ‘framework view’, the so-called ‘literary hypothesis’, adding that in his judgement this is ‘only viable’ view.  He suggests that elements in the story such as the creation of Eve from Adam’s side, her encounter with the serpent, and the tree of life are symbols, representing historical truth, the details of which are now hidden from us.

Whereas the CSBI excludes belief in theistic evolution, Packer can happily endorse Denis Alexander’s 2008 Creation and Evolution: Do We Have To Choose?, even though it is precisely theistic evolution that is advocated in that book.

It’s a grand muddle.  And that’s why I say the doctrine of inerrancy is heretical.  It splits the Christian community, and diverts energy away from the main stream and down the precipitous side gully of needless controversy.