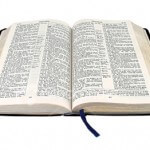 Although we do not deny that the Holy Spirit, in his inspiration of Scripture, is often happy to give us approximations and generalisations, where necessary he calls our attention to the smallest detail of grammar.

Hebrews 12:27 ‘The words “once more” indicate the removing of what can be shaken—that is, created things—so that what cannot be shaken may remain.’

The argument turns on one phrase – ‘once more’.

Galatians 4:9 ‘But now that you know God—or rather are known by God—how is it that you are turning back to those weak and miserable forces[a]? Do you wish to be enslaved by them all over again?’

The argument turns on the passive, rather than the active voice of the verb.

The argument turns on the present, rather than the past, tense.

John 10:34-36 ‘Jesus answered them, “Is it not written in your Law, ‘I have said you are “gods”’[a]? 35 If he called them ‘gods,’ to whom the word of God came—and Scripture cannot be set aside— 36 what about the one whom the Father set apart as his very own and sent into the world? Why then do you accuse me of blasphemy because I said, ‘I am God’s Son’?’

The argument turns on the mood of the verb.

Matthew 23:37 ‘“Jerusalem, Jerusalem, you who kill the prophets and stone those sent to you, how often I have longed to gather your children together, as a hen gathers her chicks under her wings, and you were not willing.’

The argument turns on the inviolability of a single word.

Galatians 3:16 ‘The promises were spoken to Abraham and to his seed. Scripture does not say “and to seeds,” meaning many people, but “and to your seed,”[a]meaning one person, who is Christ.’

The argument turns on the singular, rather than a plural, noun.

Matthew 5:18 “For truly I tell you, until heaven and earth disappear, not the smallest letter, not the least stroke of a pen, will by any means disappear from the Law until everything is accomplished.”

The argument turns on the retention of the smallest letter in the Hebrew Alphabet.