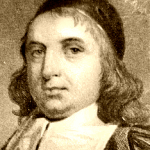 This entry is part 7 of 16 in the series: The Fountain of Life (Flavel)

A summary of ch. 21 of John Flavel’s The Fountain of Life.

“The Lord Jesus the same night in which he was betrayed took bread: And when he had given thanks, he broke it, and said, Take, eat: this is my body, which is broken for you: this do in remembrance of me. After the same manner also he took the cup, when he had supped, saying, This cup is the new testament in my blood: this do you, as oft as you drink [it], in remembrance of me.” 1 Corinthians 11:23-25

In the words read, are four things noted by the apostle,

1. The author of it, The Lord Jesus: Who but he that came out of the bosom of the Father, and is acquainted with all the counsels that are there, knows what will be acceptable to God? And who but he can give creatures, by his blessing, their sacramental efficacy and virtue? Bread and wine are naturally fit to refresh and nourish our bodies; but what fitness have they to nourish souls? Surely none, but what they receive from the blessing of Christ that institutes them.

2. The time when the Lord Jesus appointed this ordinance. “In the same night in which he was betrayed:” it could not be sooner, because the passover must first be celebrated; nor later, for that night he was apprehended.  By instituting it that night, he gives abundant evidence of his care for his people, in spending so much of that little, very little, time he had left, on their account.

3. The institution itself; in which we have the memorative, significative, instructive signs, and they are bread and wine.

4. The use, design, and end of this institution. In remembrance, or for a memorial of me. O there is much in this: Christ knew how apt our base hearts would be to lose him, amidst such a throng of sensible objects as we here converse with; and how much that forgetfulness of him and of his sufferings, would turn to our prejudice and loss; therefore does he appoint a sign to be remembered by: “As oft as you do this, you show forth the Lord’s death until he come.”

DOCTRINE. That the sacramental memorial Christ left with his people, is a special mark of his care and love for them.

1. The saving knowledge of him. At the Lord’s table, there our old acquaintance is renewed, and the remembrance of his goodness and love refreshed and revived: “We will remember your love more than wine; the upright love you,” Cant. 1:4.

3. This remembrance of Christ includes suitable impressions made upon the affections, by such a sight and remembrance of him: and therein lies the nature of that precious thing which we call communion with God.  This begets a double impression on the heart.

(1.) A just and deep indignation against sin.  When the believer considers and remembers, that sin put Christ to all that shame and ignominy, and that he was wounded for our transgressions, he is filled with hatred of sin, and cries out, O sin, I will revenge the blood of Christ upon you! you shall never live a quiet hour in my heart.

(2.) An humble adoration of the goodness and mercy of God, to exact satisfaction for our sins, by such bloody stripes, from our surety.

II. What aptitude or fitness is there in this ordinance, to bring Christ so to remembrance?

1. As it is memorative, and so it has the nature and use of a pledge or token of love, left by a dying to a dear surviving friend.

2. As it is a significative sign, most aptly signifying both his bitter sufferings for us, and our strict and intimate union with him; both which have an excellent usefulness to move the heart, and its deepest affections, at the remembrance of it.

(i) That Christ is the bread on which our souls live, proper meat and drink for believers, the most excellent New-Testament food.

(ii) That the New Testament is now in its full force, and no substantial alteration can be made in it, since the testator is dead, and by his death has ratified it.

III. How Christ has, hereby, left such a special mark of his care for, and love to his people.

1. Hereby he has made abundant provision for the confirmation and establishment of the faith of his people to the end of the world.

2. By this he has made like abundant provision for the enlargement of the joy and comfort of his people.

3. This is one of the highest, and best helps for the mortification of the corruption of his people. Nothing tends more to the killing of sin, than this does. Christ’s blood, as it is food to faith, so it is poison to our lusts.

4. He has provided an ordinance so excellently adapted, to excite and blow up his people’s love into lively flame.

5. It is one of the strongest bonds of union between them that can be:1 Cor. 10:17. “We being many, are one bread, and one body; for we are all partakers of that one bread.”

1. Surely Christ foresaw, that, notwithstanding what he is, has done, suffered, and promised yet to do for his people, they will for all this be still apt to forget him.

2. Sacrament-seasons are heart melting seasons; because therein the most affecting and heart-melting recognitions and representations of Christ are made. As the gospel offers him to the ear, in the most sweet, affecting sounds of grace; so the sacrament to the eye, in the most pleasing visions that are on this side heaven.

3. The believing and affectionate remembrance of Christ, is of singular advantage at all times to the people of God.

(i) If at any time the heart be dead and hard, this is the likeliest means in the world to dissolve, melt, and quicken it. Look hither hard heart; hard indeed if this hammer will not break it. Behold the blood of Jesus.

(ii) Are you easily overcome by temptations to sin? This is the most powerful restraint in the world from sin.

(iii) Are you afraid your sins are not pardoned, but still stand upon account before the Lord? What more relieving, what more satisfying, than to see the cup of the New Testament in the blood of Christ, which is “shed for many for the remission of sins?” Who shall lay anything to the charge of God’s elect? It is Christ that died.”

(iv) Are you staggered at your sufferings, and hard things you must endure for Christ in this world?  What is there in the world more likely to steel and fortify your spirit with resolution and courage, than such a sight as this?

(v) Is your faith staggered at the promises? Can you not rest upon a promise? Here is what will help you against hope to believe in hope, giving glory to God. For this is God’s seal added to his covenant, which ratifies and binds fast all that God has spoken.

(vi) Do you idle away precious time vainly, and live unusefully to Christ in your generation? What more apt both to convince and cure you, than such remembrance of Christ as this?

4. Though all other things do, yet Christ neither does, nor can grow stale. Here is an ordinance to preserve his remembrance fresh to the end of the world. The blood of Christ does never dry up. The beauty of this rose of Sharon is never lost or withered. He is the same yesterday, to-day, and forever.

Blessed be God for Jesus Christ!