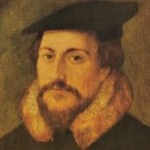 C.H. Spurgeon had a portrait of John Gill, Baptist preacher and commentator, in his vestry.  The portrait, says Spurgeon, ‘represents him after an interview with an Arminian gentleman, turning up his nose in a most expressive manner, as if he could not endure even the smell of free-will.’ (Commentating and Commentaries, p9)

Spurgeon himself, as a good Calvinist, had a similar distaste for the notion of ‘free will’.  I must say that I sometimes feel that an appeal to free will is used too glibly by preachers in order to explain away some of the tougher points of Christian doctrine and experience.

Roger Olson’s one-man A to Z of Evangelical Theology is, in effect, a 300-page advertisement for Arminian theology.  In his article on ‘Freedom/Free Will’ (which contains no reference to Scripture whatsover), Olson characteristically implies that the Calvinists are the ‘bad guys’ and that he and his fellow-Arminians are the oppressed and innocent minority.  For example, when Calvinists oppose Arminian teaching, they are ones who engage in ‘vitriolic attacks’ and who even, on occasion, dismiss Arminians as ‘heretics’.  To read this article, you wouldn’t dream that an Arminian would ever say anying nasty or unfair about Calvinists; but they sometimes do.

But to matters of substance:- Olson observes that Arminians do not affirm unlimited free will.  As creatures, human beings are limited in all kinds of ways; they can choose from only a limited range of options, and the choice is further limited by the constraints of nature and nurture.  Furthermore, as fallen creatures, our wills are in bondage to sin.  However, God’s prevenient grace is given to all, so that they can freely choose to co-operate with grace and receive salvation.

Calvinists do (as Olson points out) recognise a limited kind of free will, even in the unregenerate.  Nothing external to themselves compels them to sin, and yet they freely choose to do so.  Yet their very sin enslaves them so that they cannot, and do not, choose to receive salvation, unless enabled by God’s effectual grace.  Reformed thinkers tend to follow Calvin, when he acknowleged (Institutes, II.2.7) this sort of free decision, but then asked, ‘What purpose is served by labelling with a proud name such a slight thing?’  And he adds: ‘I hold that because it cannot be held without great peril, it will, on the contrary, be a great boon for the church if it be abolished.   I prefer not to use it myself, and I should like others, if they seek me advice, to avoid it.’

J.I. Packer (in Concise Theology) , follows Calvin’s advice by distinguishing ‘free agency’ (which he affirms) and ‘free will’ (which he denies).  And in his classic, Knowing God, Packer reminds us that, rather than vaunting our own supposed free will, we would do better to celebrate God’s free grace:-

We can only claim from him justice—and justice, for us, means certain condemnation. God does not owe it to anyone to stop justice taking its course. He is not obliged to pity and pardon; if he does so it is an act done, as we say, “of his own free will,” and nobody forces his hand. “It does not depend on man’s will or effort, but on God’s mercy” (Rom 9:16 NEB). Grace is free, in the sense of being self–originated and of proceeding from One who was free not to be gracious. Only when it is seen that what decides each individual’s destiny is whether or not God resolves to save him from his sins, and that this is a decision which God need not make in any single case, can one begin to grasp the biblical view of grace.