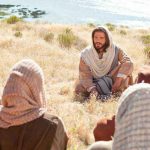 Jesus is rightly regarded as a master-teacher.  But what would it mean for preachers today to follow his example?

Jesus told stories based on everyday life, often in the form of parables.  Stories not only make teaching more memorable, but also enable the truth to penetrate further into the hearers’ minds and hearts.

Jesus could have simply said: “God loves you so much that He will welcome you back to Him no matter how far you have wandered away.”  But, instead, he told the story of the Prodigal Son.

If we only tell people what they are expecting to hear, they will switch off.  We need to find ways of presenting timeless truths in fresh ways.

Jesus’s teaching was often hyperbolic, outrageous, exaggerated, or even shocking (“You brood of vipers!”)  He talked about amputating our hands and ripping out our eyes (Mt 5:29f).  He told people to take the logs out of their eyes.

Make the truth stand out and demand attention.  Just like Jesus did.

There is a way of speaking which is bland and utterly forgettable.

Then there is Jesus’ way of speaking, which was to use catchy sayings and word-play.

“It is easier for a camel to go through the eye of a needle than for a rich man to enter the kingdom of heaven.”

“It is not the healthy who need a doctor, but the sick. I have not come to call the righteous, but sinners to repentance.”

“Ask and it will be given to you; search, and you will find; knock, and the door will be opened for you.”

These sayings, and many more, capture the imagination, and remain in the memory.

Rather than teach didactically, serving up unappetising chunks of truth, Jesus made people think for themselves by constantly asking them questions.  Good questions make people hungry for the truth, and claim it as their own when they find it.  Good questions can disarm hostile critics.

Jesus’ washed the feet of the disciples to teach servant leadership (John 13:3–17). He called a little child to him to discuss childlike faith (Matthew 18:1–4). He described unselfish giving after watching a widow drop two small coins into the temple offering (Mark 12:41–44).’

His parables were drawn from everyday situations.  They made the truth visible.  When he told the parable of the sower, he may well have been able to point to a sower and say, “Look!”

It is reasonable to assume that those carefully-crafted stories and epigrams were repeated over and over, as Jesus travelled around.  (This, by the way, would have made them more memorable to the disciples, who later caused them to be written down).

Although there is such a thing as ‘vain repetition’ in preaching as well as in praying, don’t be afraid to say important things over and again.

Based on this post by Aaron Earles.  See also this (similar) post, by Brandon Hilgemann.  And this, by Josh Hunt.