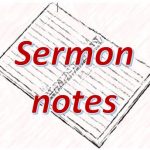 It shouldn’t be too difficult for us to unlock the meaning of this parable: the key is hanging at the door.  V11: ‘…because he was near Jerusalem and the people thought that the kingdom was going to appear at once’

Luke’s record of this journey to Jerusalem began at ch. 9:51 – ‘As the time came for him to be taken up to heaven, Jesus resolutely set out for Jerusalem’

Jesus had spoken repeatedly about what was going to happen to him when he got to Jerusalem, but his listeners had not been able, or had not wanted, to understand.  Lk 18:31ff – Jesus took the Twelve aside and told them, “We are going up to Jerusalem, and everything that is written by the prophets about the Son of Man will be fulfilled.  He will be handed over to the Gentiles. They will mock him, insult him, spit on him, flog him and kill him.  On the third day he will rise again.”  The disciples did not understand any of this. Its meaning was hidden from them, and they did not know what he was talking about.

It’s very clear from the Gospel accounts that the people in general, and the disciples in particular, hoped that Jesus’ journey to Jerusalem would end in some kind of massive revolution, with Jesus being enthroned as king, his disciples appointed to high offices, and the speedy establishment an earthly kingdom, one in which Israel would be liberated from Roman oppression.  That was the kingdom they wanted.  When did they want it?  Now!  The reality, however, was going to be very different.

1.  The King must depart, and then return again after some delay, v12

In the story, a nobleman goes to a distant country in order to have himself appointed king.  Then, after a while, he returns.

Just such an event had occurred some years before.  Archelaus, son of Herod the Great, had gone to Rome to try to get Caesar Augustus to confirm his title as king.  [By the way, a delegation of Jews followed close behind with a protest to the Caesar, “We don’t want this man to be our king.”  In Archelaus’ case, the Jews had good reason for not giving him their vote: Josephus records that at the first Passover after his succession he massacred 3,000 of his subjects.  As a result Augustus severely limited his powers, denying him the title ‘king’ until he should prove worthy of it (which he never did).]

In this going away to a distant country to be appointed king, and then returning, Jesus is of course referring to himself.  Within a few days of entering Jerusalem, the cry was not, “Long live the king!” but “Crucify him! crucify him!”  Instead of a coronation, there was a murder.  Instead of a throne, there was a tomb.  But after three days he was raised to life and a short time later he left his disciples and was taken up into heaven.  This was his ‘departure’.  This was his ‘going to a distant country to have himself appointed as king.’  But he has promised to return.  When Jesus ascended, the watching disciples were told: “This same Jesus, who has been taken from you into heaven, will come back in the same way you have seen him go into heaven.”  To heaven he ascended, and from heaven he will return.

But when?  Acts 1:6 – “Lord, are you at this time going to restore the kingdom to Israel?”

Answer: Acts 1:7 – “It is not for you to know the times or dates the Father has set by his own authority.

And we’re still waiting.  We don’t know when Jesus will return.  And our problem is that we’ve waited so long now that we sometimes feel and behave as if it’s never going to happen.

Be expectant, be ready.  Your King is coming back.  It is more certain that Jesus will return than it is that the sun will rise tomorrow morning.  His appearance, though long delayed, is certain.

But what should we be doing while we wait?

2.  The King’s followers have work to do while they wait for his return

In the parable, v13, the nobleman called ten of his servants and gave them ten minas. ‘Put this money to work,’ he said, ‘until I come back.’

One servant put the money to good use, made ten more, and was rewarded with much greater responsibility.  Another put it to good use; made five more, and received his reward.  Another didn’t put it to use at all.  Even the one he had was taken away from him and given to one of the others.

What is it that has been given in equal measure to the servants of Jesus Christ?  The gospel, the message of salvation, the good news of eternal life through faith in Christ.  The task that has been given to all of us is to put that knowledge, that experience, to work.

We are not called simply to sit back and wait for the kingdom to come.  There’s work to do.  We are facing an unfinished task.  The day is far spent.  We work hard at our earthly work.  How hard are we working for the work of the kingdom?

The reward is described in terms of more responsibility. ‘Because you have been trustworthy in a very small matter, take charge of ten cities.’  We do not know a great deal about life in heaven.  But we do know that it will be an active, fulfilled, responsible life.  The King, at his glorious return, will reward his servants in proportion to their faithfulness and stewardship, and they will be given opportunity to serve him in yet greater ways.

See then God’s purpose for our lives as we wait for our blessed Saviour to return: God’s purpose is for this life is to be a training-ground, and a testing-ground, for our responsibilities in the kingdom.

But what will happen to the enemies of the kingdom?

3.  The King’s enemies, though now apparently triumphant, will meet their punishment in the end v14, 27.

In the parable, the nobleman’s subjects hated him and sent a delegation after him, saying, “We don’t want this man to be our king.”  Then, after the king returned, he said, “But those enemies of mine who did not want me to be king over them–bring them here and kill them in front of me.'”

These represent those who opposed Christ, before and after his ascension, with bitter hatred and stubborn opposition.

They hated Jesus and treated with derision the prospect of Jesus as king.  Jn 19:14f  “Here is your king,” Pilate said to the Jews.  But they shouted, “Take him away! Take him away! Crucify him!” “Shall I crucify your king?” Pilate asked. “We have no king but Caesar,” the chief priests answered.

They got their own way.  The enemies of Jesus seemed to have won.  But this parable teaches that their eventual punishment is absolutely certain.

We can try to soften the blow in a number of ways:-

“It’s only a story.  We shouldn’t push the details of parables too far.”  True: but even a story has to mean something.

“Surely, Jesus is more interested in saving people than in destroying them.”  True again: Jn 3:17 – ‘God did not send his Son into the world to condemn the world, but to save the world through him.’

Or again: “The enemies of Christ can become his friends.”  True yet again.  Look at Paul.

‘We may be horrified by the fierceness of the conclusion; but beneath the grim imagery is an equally grim fact, the fact that the coming of Jesus to the world puts everyone to the test, compels everyone to a decision.  And that decision is no light matter.  It is a matter of life and death.’

A time of opportunity for the enemies of the King to come to their senses.  ‘The Lord is not slow in keeping his promise, as some understand slowness. He is patient with you, not wanting anyone to perish, but everyone to come to repentance.’

A time of labour for the servants of the King to work for the kingdom.  And when the King returns, may we hear from his lips, “Well done, my good servant!”

A time of waiting and longing for the return of the King, which, though long delayed, is certain.  ‘He who testifies to these things says, “Yes, I am coming soon.” Amen. Come, Lord Jesus.  The grace of the Lord Jesus be with God’s people. Amen.’